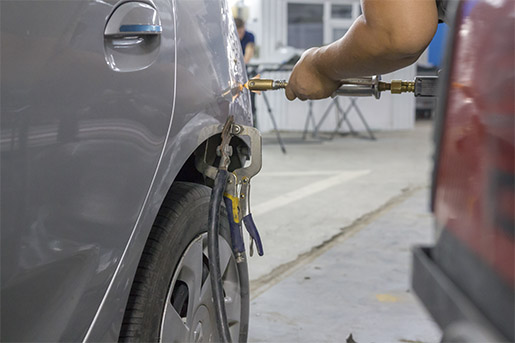 Paintless Dent Repair: What it is, How it Works, and Why You Shouldn’t Try it at Home

At UniBodyTech, we get a lot of questions about paintless dent repair or PDR. Many people get the wrong impression about paintless dent repair thanks to those late-night infomercials. While auto body professionals like us know that you need special tools to massage dents out, infomercials will have you believe that a cheap kit with some glue and a tool that you twist and pull will get the job done.

But these tools can damage your car and the informercials’ demonstration isn’t how professional paintless dent repair is done. We’ll take you through the process of PDR to dispel any myths you might’ve heard on TV.

The Art and Science of Paintless Dent Repair (PDR)

Unlike, say, wiring you car with reverse sensors, or aligning a vehicle’s wheels, paintless dent repair is less about mechanical skill and more about the technician’s ability to control his hands as he slowly massages out a dent. To do PDR, a technician will first decide if paintless dent removal is possible, then they’ll select the appropriate tools to access the inside of the dent. Once they’ve gained access to the interior of your vehicle’s body, they’ll slowly work from the inside of the dent to massage it out.

If you’re trying to do paintless dent removal on your own, you run the risk of pushing the dent out too far which stretches the metal. As a result, unless you get it just right, this causes the metal to become loose and flabby which will have to be replaced.

The Tools of PDR

The other important part of PDR is the tools. When it comes to PDR, you can go from cheap tools (like the ones you’ll see on infomercials) to very high-end, specialized tools. As you might imagine, with any type of PDR tool, you get what you pay for.

But good tools allow a professional technician to repair your dent with the right level and shape of pressure. Plus, with a proper arsenal of tools, auto body professionals can access the area behind the dent without damaging other parts of your car… which brings us to the next point.

Accessing the Inside of a Dent

Of course, the difficulty of accessing a dent varies depending on where the dent itself is, but lots of damage happens when amateurs try to access the inside of a dent to push it out. For example, if you drive a hatchback and you have a dent on the hatch, you likely have a few layers of trim panels to get through before you can actually access the interior of your car’s body. Breaking panels is expensive and not worth the risk when dent repair at an auto body shop is so easy.

808.836.0500 or fill out the form below with your information and requested services. One of our team members will get back to you as soon as possible to confirm your appointment.
Appointment

Is your vehicle already with us? Enter your phone number to check the status.